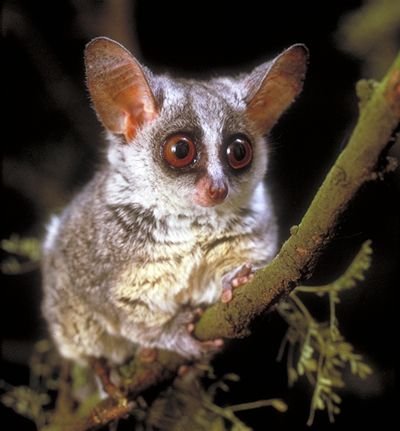 Bushbabies have a fluffy, silver grey to dark brown coloured coat with a small roundish head and big round ears and eyes.

These cute little creatures's name "bushbaby" refers to their plaintive cries - loud, shrill and very similar to those of a human baby.

The bushbaby is a very shy tree creature. These nocturnal mammals spend their days in hollow trees and at night will forage among the treetops for insects and fruits.

Bushbabies eat mostly fruits, acacia gum, leaf buds and small insects. They have large, round eyes and a very good night vision and thin but big ears that enable them to hear and track insect prey in the dark. In fact they can locate prey by sound so precisely that they can catch flying insects from the air. They are fast, agile and very accurate.

When they jump through thorn bush or thick growth, they fold their delicate ears flat against their heads to protect them. They do this during rest as well.

In the Luangwa Valley, Bushbabies are mostly found in forests and thickets. They are usually solitary, but may group together and form small and temporary communities.

They have an unusual way of scent marking called urine washing which involves dribbling urine over their hands and feet and then rubbing them together. They then leave a trail of damp and smelly foot and hand prints along the way. This sticky urine also gives them a better grip as they jump between branches.

Males check the reproductive condition of females by sniffing their genitals and will fight savagely for mating rights. A female on heat will also aggressively repulse the male's first approaches. When she does finally allow it, mating takes place repeatedly for about five minutes every two hours.

A mother stays continuously with her babies for their first three days. The young are weaned at six weeks and fully independent at two months old. Young males disperse a few kilometres from their birthplace but the females often remain in their natal groups. Individuals have overlapping home ranges which they mark with a slimy secretion from their chest gland.

Bush babies hide during the day in order to avoid contact with predators such as eagles, genets, wild cats and even snakes. Since they are easily captured on ground they mostly stay in trees and rely on their extraordinary jumping capabilities. Bushbabies are related to the lemurs of Madagascar.

FUN FACT: Bushbabies don't run on the ground, they "hop", similarly to kangaroos!