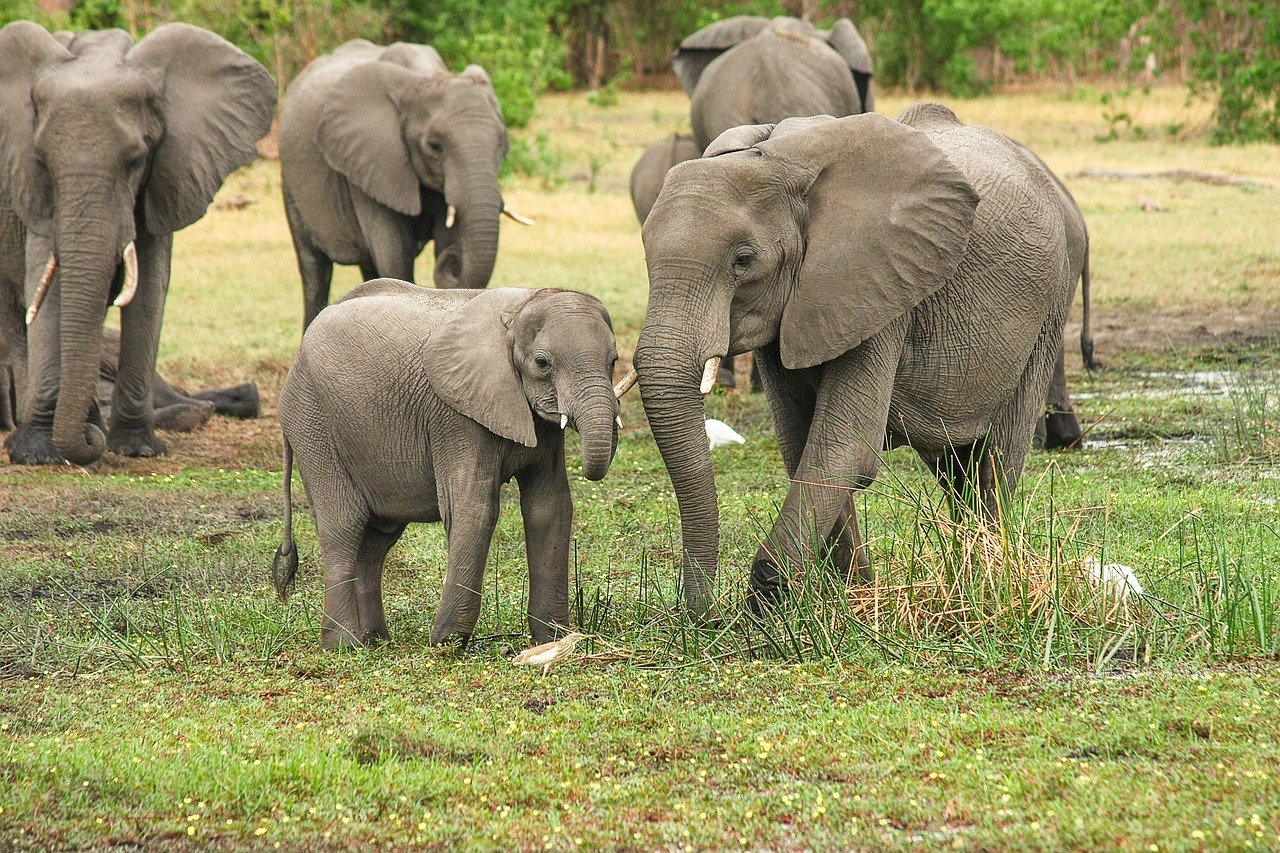 Elephants are the world's largest land mammal that, in Luangwa, can reach up to three metres tall and weight up to six tons.

They spend most of their time eating a wide range of plant material including grass, leaves, woody parts of trees and shrubs, flowers and fruits when available.

They are an important part of the ecosystem as because they help keep the soil fertile, disperse tree seeds and provide food to other animals thanks to various undigested seeds in their dung - about 60% of the seeds they eat come out undigested. An adult may eat up to 150kg of food a day.

Elephants love water and mud baths mostly because it helps them cool down and protect them from the harsh African sun. By applying mud on their skin and letting it dry and then rubbing against a tree to peel it off they also efficiently get rid of ticks and other parasites.

Elephants tusks are elongated upper incisor teeth embedded deep in their heads and a third of a tusk is actually hidden from view. Elephant use their tusks as tools to dig for food or water and to strip bark from trees. They also use them in battles with rivals and as a courtship tool – in fact, the larger his tusks, the more attractive a male elephant is to a female.

Just as humans are right or left-handed, elephants will also use one tusk more than the other. This most worn out, usually broken or shorter, tusk is referred to as the ‘master tusk’.

Both males and females grow tusks and in general the bigger the tusks the older the animal is. However nowadays many tusks-less pachyderms can be observed in the Luangwa Valley. This is mainly due to poaching since the big tuskers were heavily hunted which gave the males with smaller or no tusks a better chance to mate and pass on their gene.

Elephants have a gestation period of 22 months and will typically only give birth two times in a decade. A young elephant will learn how to use its trunk after three months but will suckle its mum for up to four years. They start growing tusks when they are about two and a half years.

They usually stay in groups. The females stay in very organised families where the older female is the matriarch as she knows traditional routes to water and food sources during various seasons. Young females will stay with their families all of their lives whereas males are kicked out when they get sexually mature (between 12 and 15 years old) to avoid in-breeding in herds. They typically roam on their own until they find a suitable group of bachelors to join.

The males will only start looking for females when they are in Musth (pronounced 'must’). At this time, males have increased in testosterone levels. They secrete a foul smelling green liquid from their penises which also gets stuck on the legs. This is also accompanied with heavy secretion of liquid from the temporal gland. This changes prepare them for competing for females and they become much more aggressive.

Elephants in musth carry their heads and ears higher than normal and make a deep rumbling sound. A bull elephant in musth can be extremely dangerous.

Elephants grow 6 sets of molars in their lifetimes and each set lasts for about ten years, after which they will not be able to eat properly and will slowly starve to death. African elephants have a lifespan of about 60, sometimes 70, years in the wild.

When elephants reach their last set of teeth they try to avoid wearing them too quickly by feeding mostly on soft plants found near waterholes or even in the water. They also drink a lot more to help with the fermentation of their food so elephants will generally die near a water source. In places where water is scarce we may find what looks like an "elephant graveyard", which will most likely be situated near a water source, where most elephants will have gone at the end of their lives.

The number of elephants in the Luangwa Valley has decreased dramatically in the 1980s due to the government's decision to cull the animals since there were so many in the park (around 100,000). However they hired local hunters to do the job who, following the culling program, continued to kill elephants and sell the tusks, thus leading to heavy poaching of the pachyderms and to a drastic decrease in their numbers to just about 3,000 to 4,000.

Poaching still remains a problem even though it has been greatly reduced and is nowhere near as bad as it was in the past. Elephant populations are recovering and have increased to about 15,000 in the Luangwa.

Today the IUCN lists the African elephant as vulnerable – at risk of becoming Endangered.

FUN FACT: Elephants aged less than 3 months cannot use their trunks to drink and will drink water by dipping their entire mouth (or head!) in the water! 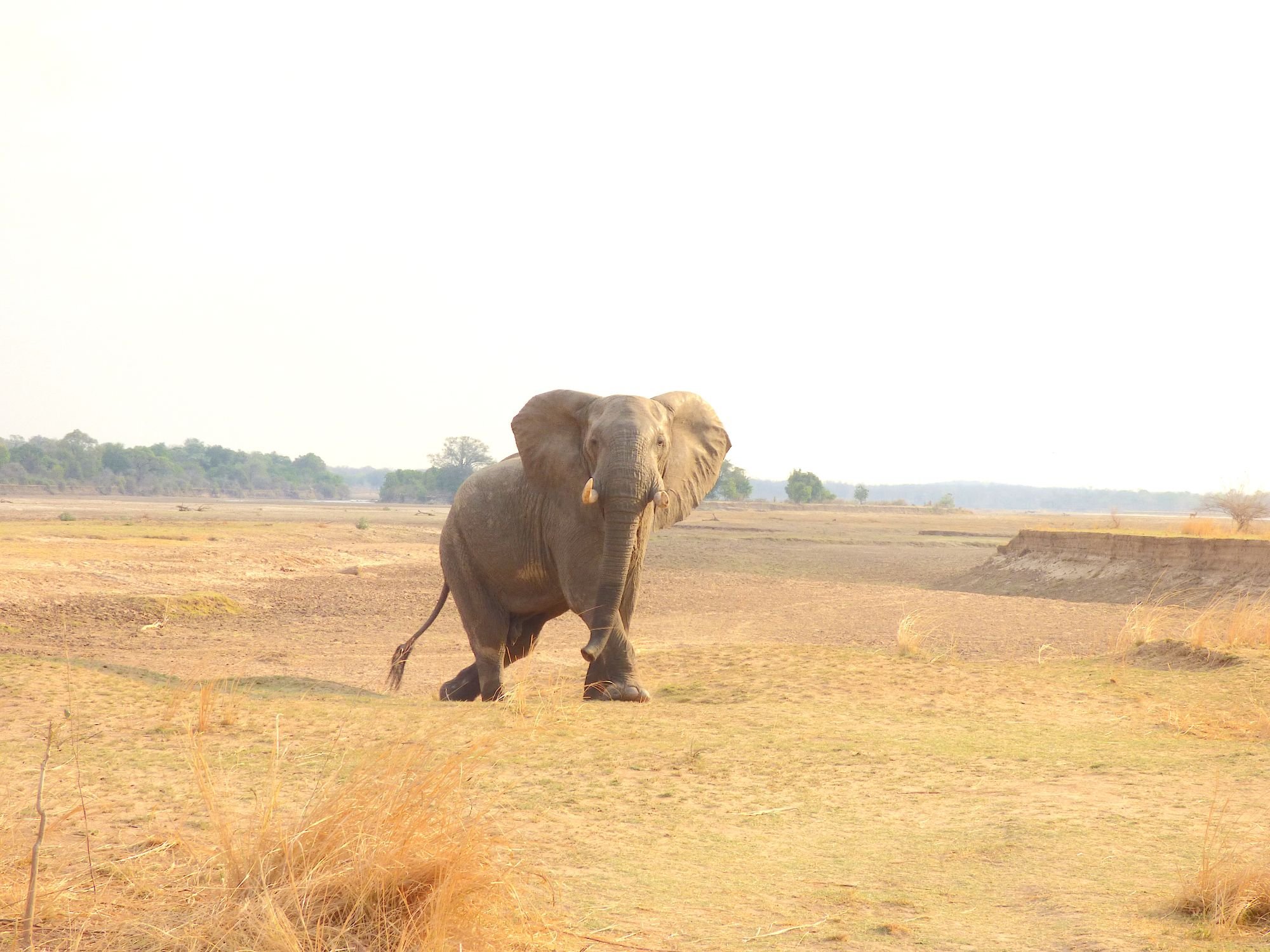