Luangwa, the valley of leopards 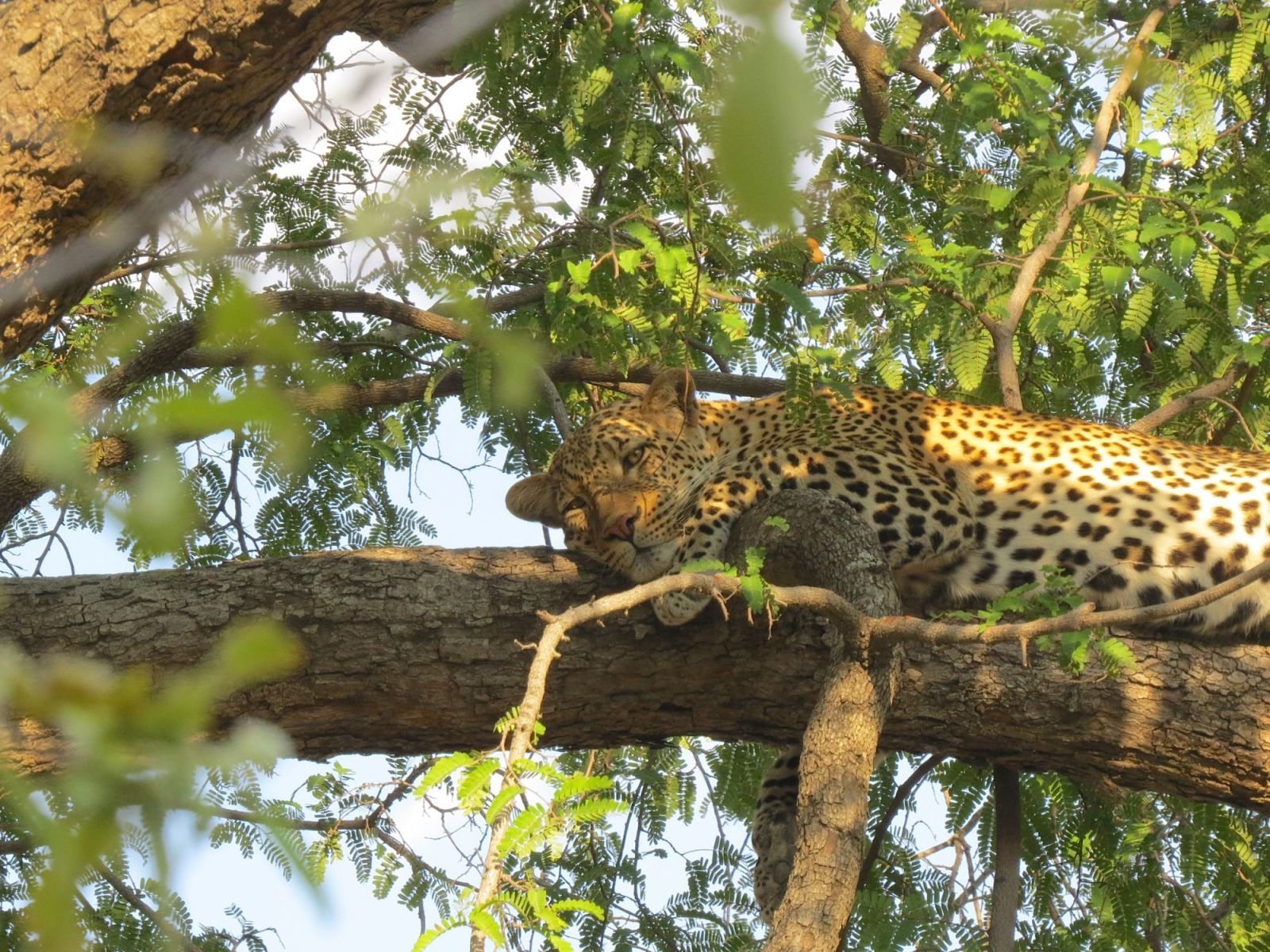 Golden eyes peer at us through the bushes. Our guide gets slightly closer and kills the engine and we all stare in awe. Right in front of us, just a few metres away, a magnificent leopard is lounging on a tree branch!

“It’s a female, she has a kill,” Kelvin Zulu, our Zambian guide whispers. Plenty of “Wow”s reverberate through the car as we are all given a glorious view of the beautiful, elusive cat. The leopard’s fixes its gaze upon us steadily. I shift uneasily in my seat under her glare, slightly nervous. We had just disturbed its meal, how would she react?

Kelvin had just been telling us how agile climbers leopards were. They can easily lift twice their body size up a tree. And the impala that this particular leopard had killed certainly looked bigger than the predator itself.

Seconds pass slowly but the leopard soon resumes its meal, munching rather lazily on the fresh, bloody carcass. I sight and let my body relax. Only then do I think to take my camera out. I had been so mesmerised that I had completely forgotten to take pictures. “She will be there a while,” Kelvin says reassuringly. “She has a cub, you will see it soon enough”. 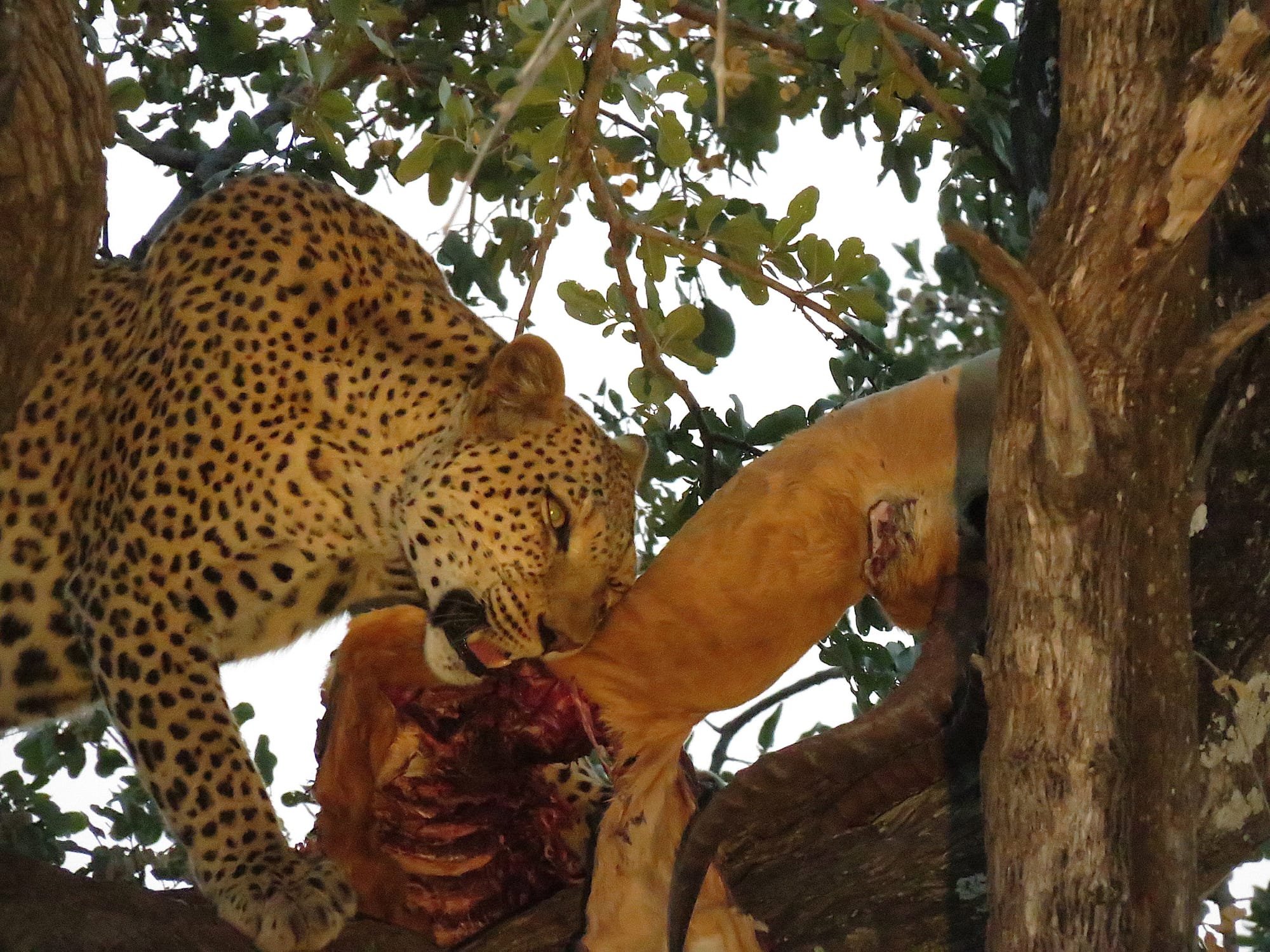 I turn toward our guide, eyebrows raised. How could he know that? I cannot resist the temptation and ask him if he had seen the cub the previous day or if someone had told him that.

“No, but I know she does because you can see the tracks on the ground of the tiny paws, look, here,” he enthuses, showing us the marks in the sand, which to me look more like an odd mixture of leaves and gravel pushed together. However, as I lean forward to the side of the car, I can indeed make out the shape of the little pad, which looks only slightly bigger than those of my cat back home.

I turn towards the other people in the car with me, and can see they are just as impressed, and restless with anticipation. We all scan the bush furiously, each of us wanting to be the first one to see the leopard cub.

“Here it is, do you see it?” Kelvin says, a huge smiling lighting up his face. I swing in my seat fast and squeeze my eyes in the same direction he is looking. “I don’t see anything!” my mother, sitting right behind me, says. It is my parents' first time on safari.

We had already seen lions and even cubs, but they hadn’t seen a leopard until now. Now they were about to see a cub, which even I had never seen before. “Here, take my binoculars and look right up here, behind the branch where the mother is, behind that bush. Look for a small pair of ears," Kelvin patiently explains.

I follow his instructions and soon find the branch he is talking about. “Oh! here it is! I see it! How gorgeous!” my mother whispers excitedly. “Look, darling, look it's right here!” she exclaims, passing the binoculars to my father seating besides her.

I smile at this priceless image of my parents acting like small children again, and at their enthusiasm. I look at our guide still looking around the bush and trees and I am amazed at how inquisitive, passionate, knowledgeable and tactful he is.

He literally was reading the bush like an open book, and he was patient and kind with us and kept entertaining us with fantastic stories of the bush. Being on a private drive also meant we could do what we wanted, and that day we had decided to track and find leopards. And there we were now! 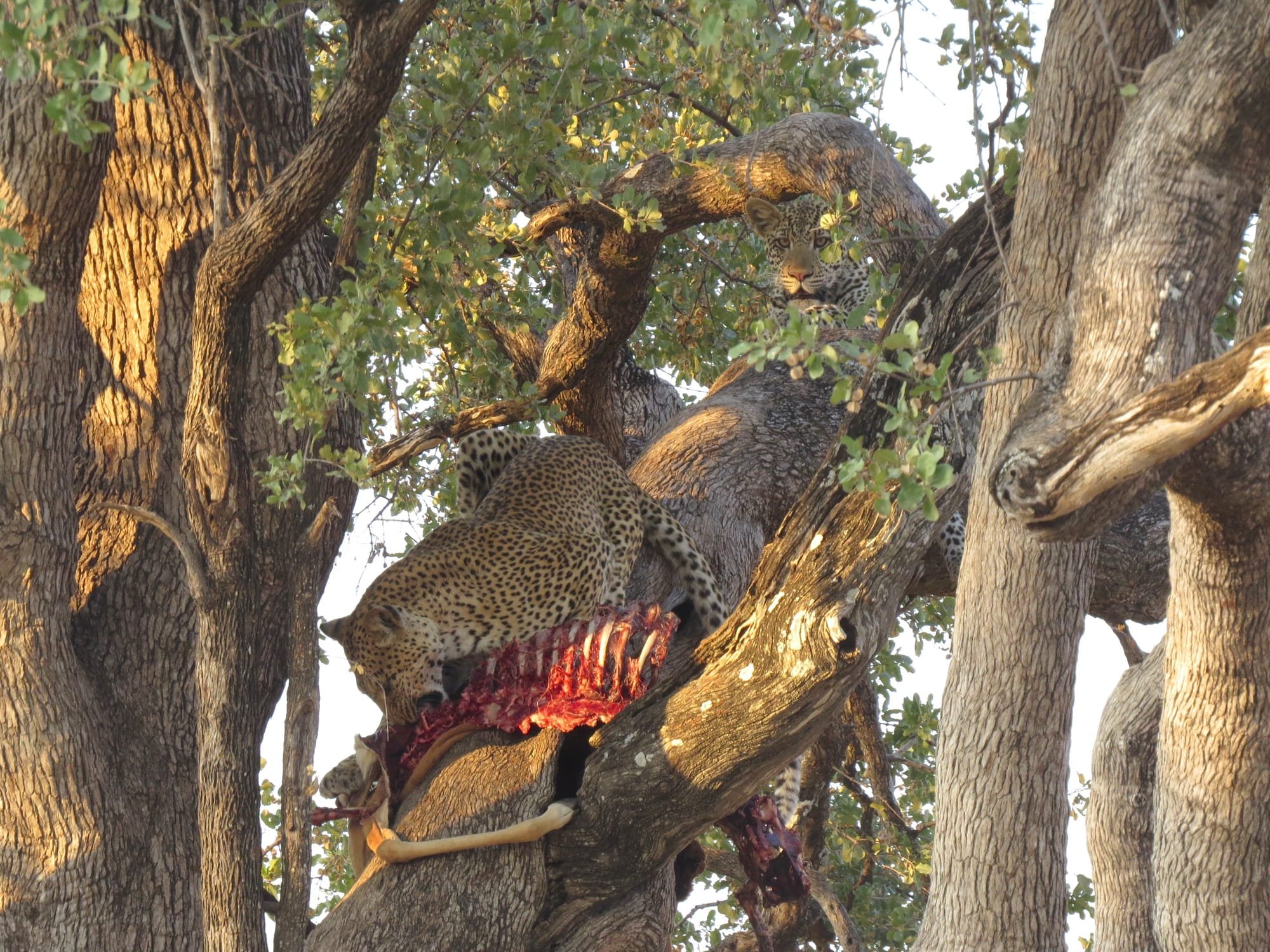 Can you spot the cub?

“The little one is joining mum now!” Kelvin says. And sure enough the leopard cub, a much smaller version of its mother wobbly wanders on the branch and settled on the other side of the kill where it starts licking and playing with a loose piece of meat. Mum, probably full by now, almost immediately stops eating and starts licking her cub.

The baby’s eyes close with contentment all while chewing on its treat. My cheeks hurt from smiling so much. I feel truly privileged to be witnessing this beautiful moment.

The Luangwa Valley, Kelvin had explained to us earlier, has one of the highest concentration of leopards in the whole of Southern Africa, thus earning its name as “the Valley of Leopards”. While most people had lived in the African bush for years, not many had seen leopards in the wild. They were elusive in most places, but not here. Kelvin assured us that he was more likely to see a leopard at least once a day than not.

I had been living in Zambia for the past year and had already seen my share of this magnificent cat. I had seen them up close, walking on the road, jumping down a tree, crossing the lawn of a lodge, but had never seen one up a tree and never with a kill. This sighting was probably the most extraordinary I have had so far and I thoroughly enjoyed every minute we spent watching it.

There truly is something extremely peaceful and spectacular to be right in the middle of the African wilderness. You get a sense of coming home to yourself and can’t help but being breathless with the beauty of the scenery and of seeing wild animals going about their business with no human activity around.

I had been snapping pictures for the last 15 minutes but finally put the camera down, deciding to fully enjoy the moment. We spend a good hour with the leopards until mum and cub decide to come down the tree and lay down there for a few moments before heading off in the thick bush. 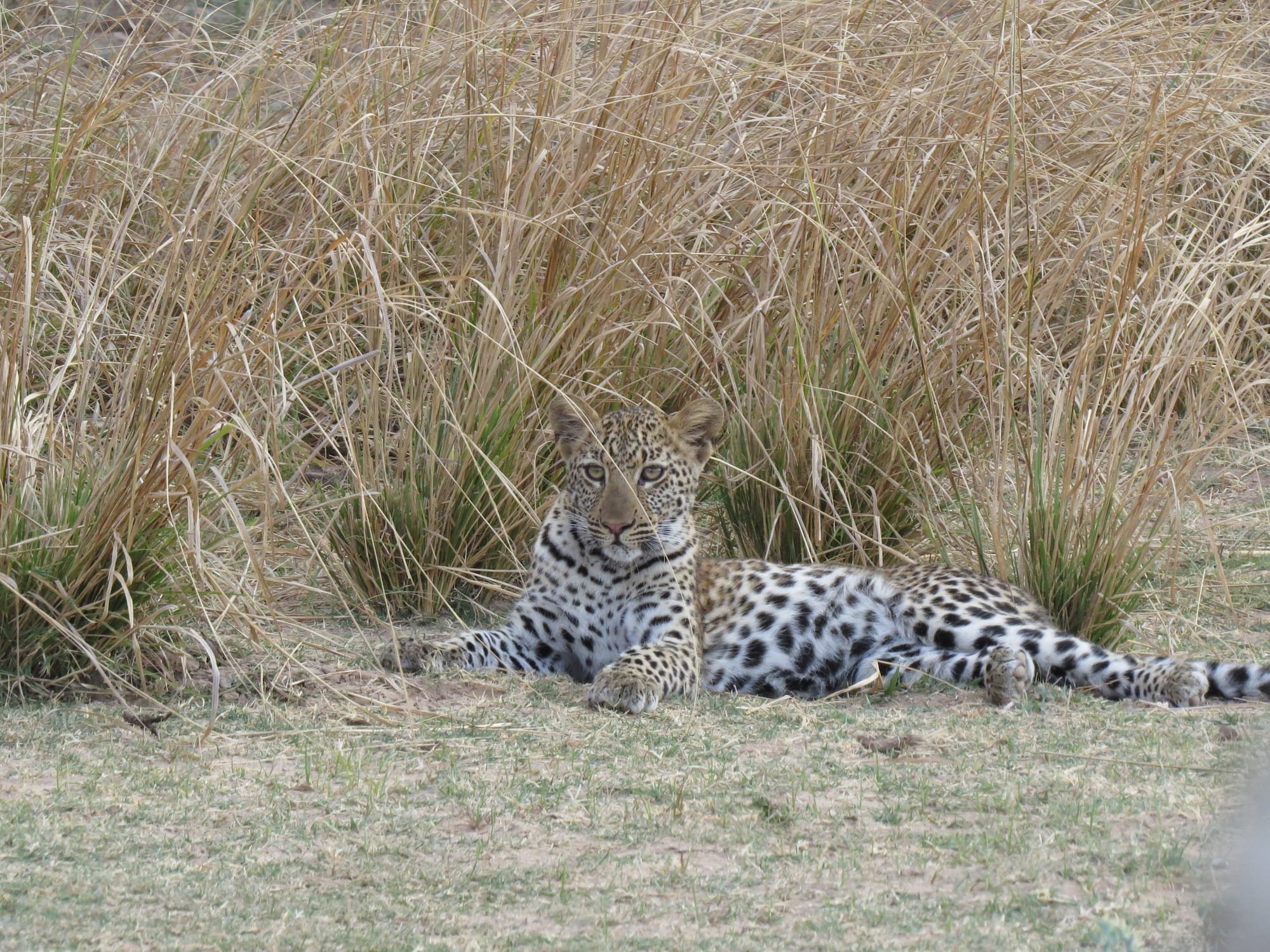 The sun is low now, caressing the wilderness with deep red and golden rays, creating an eerie, magical atmosphere. I have seen so many incredible things in the bush already, and will certainly never forget that amazing sighting. The day is not over yet, but like most people who have come to Africa and been taken by its astonishing beauty, I already look forward to coming back on another game drive!