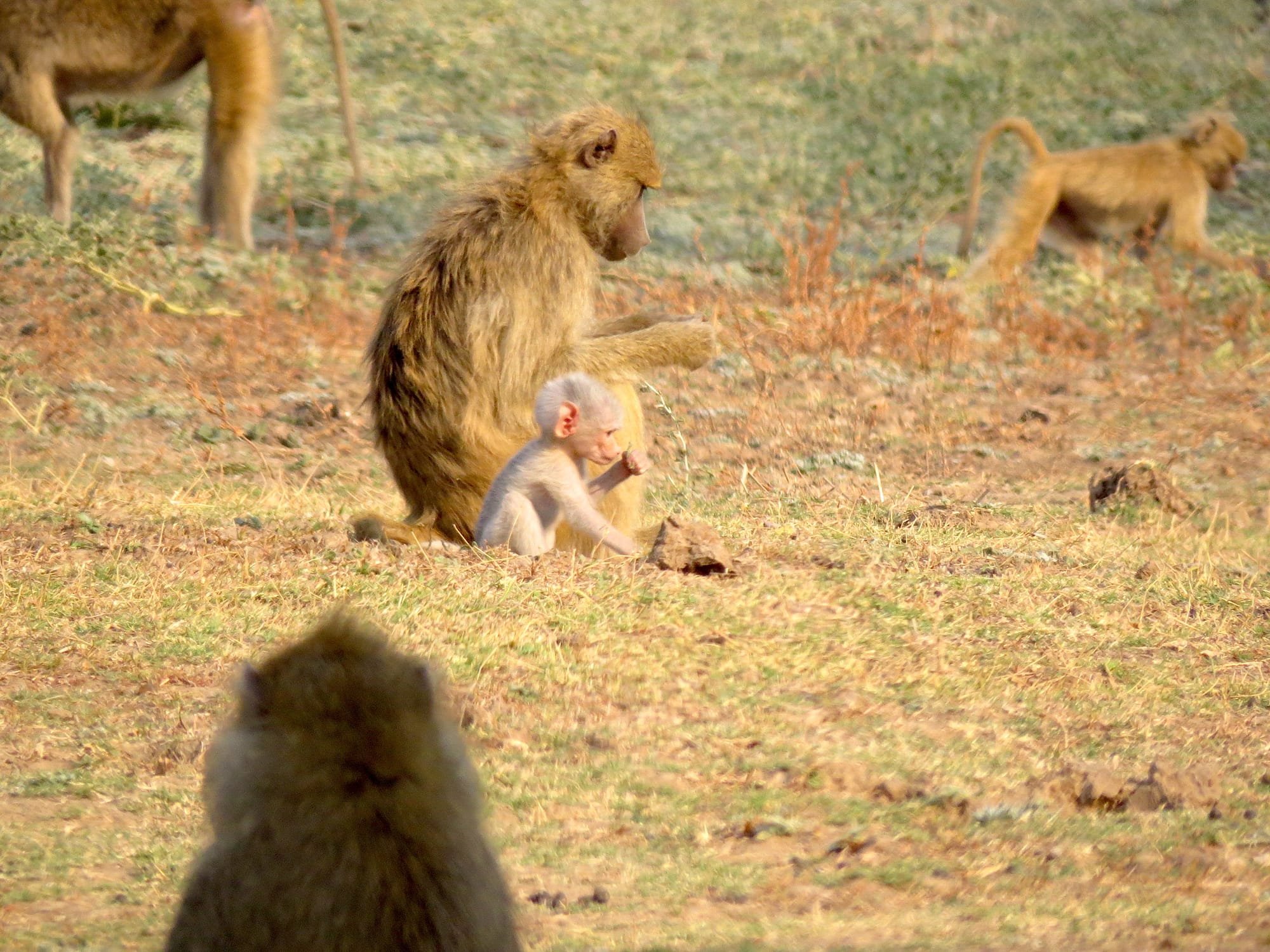 The Yellow baboon is characterised by its yellowish or light brown overall coloration with a whiter underside.

The scientific name “cyanocephalus” comes from the Greek words “kynos” (dog) and “kephalikos” (head), referring to its rather long muzzle. The Yellow baboon is also distinguished by its noticeable brow ridge as well as the yellow-grey hairs covering the dark skin of its face.

Yellow baboons are widespread can be found in central and eastern regions of Africa, stretching from Kenya and Tanzania to Zimbabwe and Zambia. They thrive in a variety of habitats such as thorn scrubs, savannahs, open woodlands and gallery forests.

Yellow baboons are generally ground-dwelling primates and they usually move around on all four. They have a very complex social system which consists of multiple males and females which share many activities such as foraging, travelling, grooming and sleeping.

When travelling or looking for another territory or foraging grounds, males lead and guide the troops on their travelling routes. They make sure that females and their offspring are in the middle of the group to be protected. Less dominant males usually guard the read.

They are mostly active during the day and will take cover in the biggest tree with the thickest branches possible every night. They usually choose a tree that is located within the core of the troop's territory and may sometimes change tree every once in a while. When they are active they will mostly be looking for food and socialising.

Yellow baboons display goodwill through various ways such as grinning, lip-smacking as well as presenting a part of the body for grooming. Yellow baboons's agression displays when threatened include a wide variety of ways like intense staring, eyelid displays, ground-slapping, branch-shaking as well as yawning, so that males expose their canines.

Their communication system includes no less than 10 various vocalisations and they usually have different alarm calls for different predators.

They will mate all year round and females will get a swollen, deeply coloured genitalia during oestrus. The gestation period lasts an average of 180 days and the new baby will stay with its mother for about a year after.

Yellow baboons are generally considered to be frugivores although they will also eat pods, grass, seeds, roots and leaves, as well as hunt small mammals such as rabbits or even baby antelopes, Vervet monkeys and eggs.

Baboons, and monkeys in general, are crucial to the ecosystem as they help dispersal of seeds due to their rather messy foraging habits. They are also food for predators such as leopards. They are also able to live quite a while without direct access to drinking water since they get the required moisture by licking dew from their coats.

In South Luangwa, Yellow baboon troops can easily comprise up to 100 individuals and can be found anywhere in national parks as well as around lodges and even in the local villages.

They are considered pests in many areas since they tend to raid crops and steal from houses.

Fun Fact: Humans and baboons share as much as 91% identical DNA. 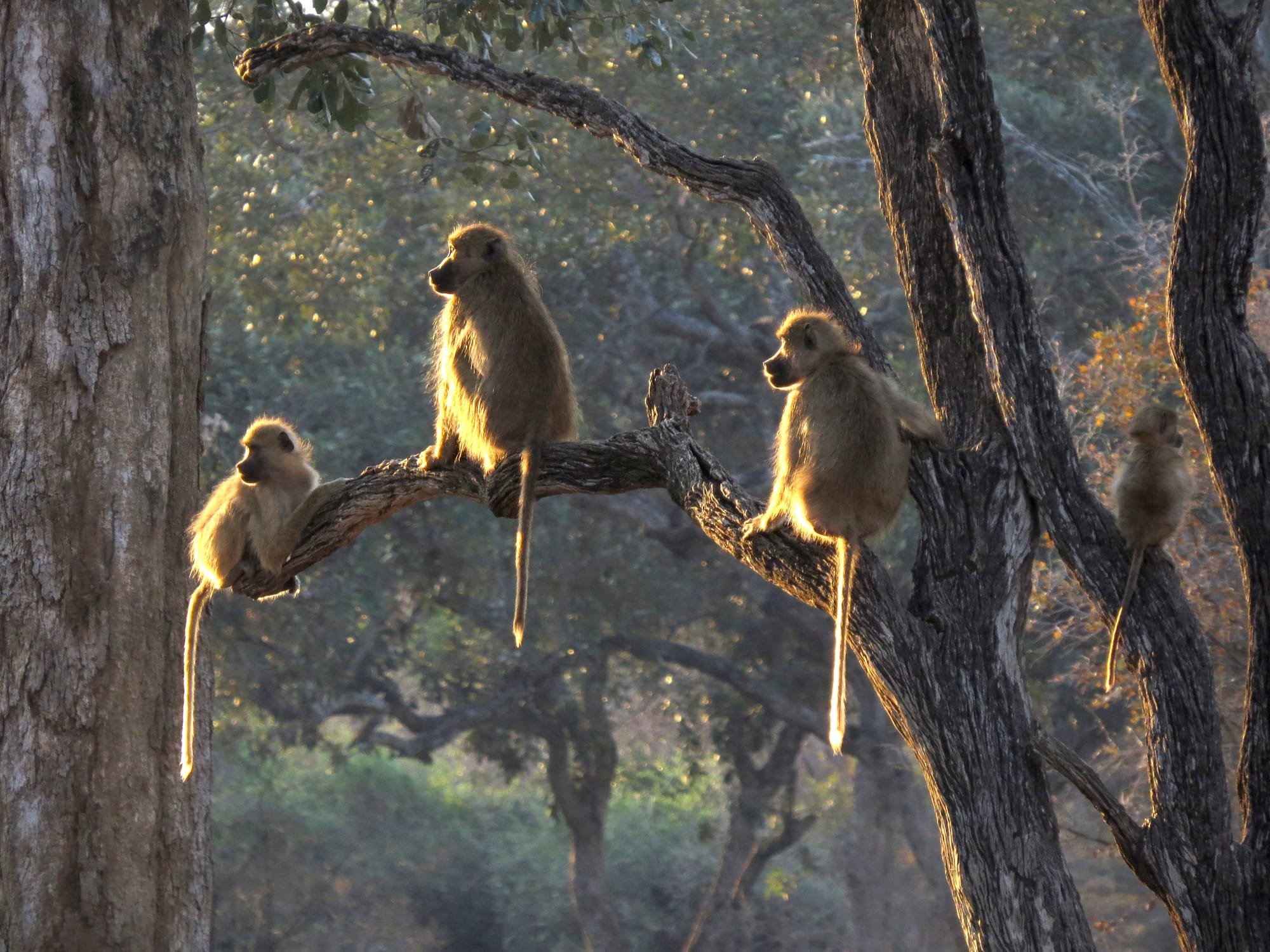